Showing posts from June, 2009
Show all

A Green Way to Get Rid of Old Electronics

June 29, 2009 (New York Times) This month, Edward Reilly, 35, finally let go of the television he had owned since his college days. Although the Mitsubishi set was technologically outdated, it had sat for years in Mr. Reilly’s home in Portland, Me., because he did not know what else to do with it, given the environmental hazards involved in discarding it. “It’s pretty well known that if it gets into the landfill, it gets into the groundwater,” he said. “Its chemicals pollute.”

But the day after the nationwide conversion to digital television signals took effect on June 12, Mr. Reilly decided to take advantage of a new wave of laws in Maine and elsewhere that require television and computer manufacturers to recycle their products free of charge. He dropped off his television at an electronic waste collection site near his home and, he said, immediately gained “peace of mind.”

Over the course of that day, 700 other Portland residents did the same. 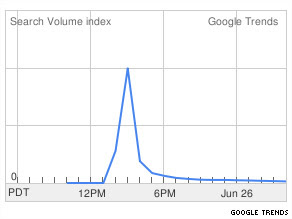 June 26, 2009 (CNN) The biggest showbiz story of the year saw the troubled star take a good slice of the Internet with him, as the ripples caused by the news of his death swept around the globe.


"Between approximately 2:40 p.m. PDT and 3:15 p.m. PDT today, some Google News users experienced difficulty accessing search results for queries related to Michael Jackson," a Google spokesman told CNET, which also reported that Google News users complained that the service was inaccessible for a time. At its peak, Google Trends rated the Jackson story as "volcanic."

As sites fell, users raced to other sites: TechCrunch reported that TMZ, which broke the story, had several outages; users then switched to Perez Hilton's blog, which also struggled to deal with the requests it received.

CNN reported a fivefold rise in traffic and visitors in just over an hour, receiving 20 million page views in the hour the story broke.

The Internet and the Crash of 2008 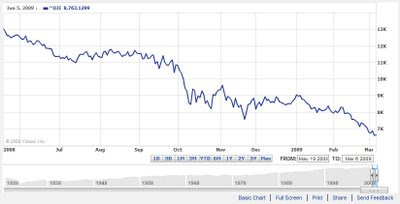 The Stock Market Crash of 2008 was devastating to millions of Americans but came at a time of general prosperity. Although there were concerns about the housing market and gasoline prices had hit record levels that summer, there were many signs that the economy was fundamentally strong. The behavior of investors seemed to be irrational—almost as if some force other than economic was driving the decline. Experts have debated all of the possible causes from declining “consumer confidence” to “short selling” to the fact that it was an election year. Undoubtedly there were many factors involved. Is it possible that the Internet itself contributed to the market’s decline?

Over the past several years the marketplace has changed radically, and this is largely due to the revolution created by Internet trading. Prior to 1995, individual investors gained access to the financial markets almost exclusively through full service brokers, discount brokers, or mutual funds. Sin…
Post a Comment
Read more

June 19, 2009
June 19, 2009 (bMighty Weekly Digest) This week, like most every week these days, has been consumed with hype about social media. We've seen everything from Facebook letting folks have meaningful URLs for their profiles, to some pretty nasty Twitter backlash. So what's really going on here? Is this social media stuff a real benefit for small and midsize companies, or just the latest fad spinning out of control.

The answer, of course, is a bit of both. As I wrote about the predictions of Twitter's impending destruction, it could very will be true. There's going to continue to be churn among these sites and services (will the last person leaving MySpace please turn out the lights?). But whatever happens to Twitter or MySpace or Facebook or the site du jour, social media isn't going away.

So, what do you do with it? Web metrics guru Marshall Sponder says the key is to learn to measure how your company is being talked about online, and he offers insight into a selection…
Post a Comment
Read more

June 12, 2009 (eWeek) - Google is showcasing an alpha version of a cloud-based data management system designed to make it easy for users to integrate data from tables in disparate databases.

Called Fusion Tables, the technology is in the alpha phase and is focused on “fusing” the areas of data management and collaboration - merging multiple data sources, discussion of the data, querying, visualization, and Web publishing.

“If you think about databases, they’re very much focused on giving very high performance SQL processing and high throughput transactions, which is great…what we’ve been trying to do is take a different angle on this,” said Alon Halevy, a software engineer at Google. “We try to support collaboration among people.”

Through Fusion Tables, users can insert tables from their databases and share them with other users, circumventing the semantic heterogeneity problems that occur when trying to merge data from different sources. 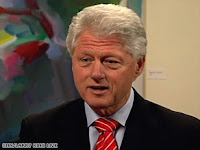 June 14, 2009 (CNN) Former President Bill Clinton urged people to accept themselves and others in a world system that is "unstable, unequal and unsustainable."

Clinton gave the keynote address Saturday to members of the American-Arab Anti-Discrimination Committee in Washington. The organization gave the 42nd U.S. president its global leadership award.

The world is an "interdependent" system where an event in one country, such as an economic collapse, can affect the entire globe, Clinton said.

The former president said recent events such as the swine flu outbreak prove the system is unstable. Inequalities in health care worldwide show the system is unequal and recent trends in global warming show it is unsustainable, Clinton said.

Global cooperation is crucial for the survival of mankind, he added.

"If we have a chance, it has to begin by people accepting that they can be proud of who they are without despising who someone else is," Clinton said.

June 13, 2009 (CNN) In 1984, Russian mathematician Alexey Pajitnov was playing with one of his favorite puzzles when he had an inspiration: How about creating a computer version?

Pajitnov wrote the program in his spare time, simplifying the idea to make it easier for those of us who aren't math geniuses.

He used shapes made of four squares -- hence "Tetris," which comes from the Greek word for four, "Tetra."

In the game, players must position and stack blocky shapes to fill a grid without leaving spaces in between. Successfully completed sections disappear. The more sections the player completes without reaching the top, the higher the score. The faster players accomplish this, the higher their score. iReport: 25 years of Tetris

Steadily, the game worked its way around the world. Millions of people found themselves glued to their computers and game players -- hearts racing and screaming in frustration -- all over getting a simple horizontal line of digital squares…
Post a Comment
Read more

The Switch to Digital TV is Today

June 12, 2009 (New York Times) Across the United States today, television stations will power down the analog signals that have sent TV shows into homes for six decades.

Friday represents the deadline for the country’s transition to fully digital television broadcasting. Throughout the day, TV stations are switching off analog and in many cases moving to new positions on the channel dial.

Some stations are making the switch early on Friday, timed to their morning newscasts, so that they can field phone calls from confused viewers during normal work hours. Other stations are waiting until the end of the day, sometimes at 11:59 p.m. The staggered timing will amount to a rolling transition across the country.

On Friday morning, some stations were already indicating that some viewers had been caught off-guard. WAFB, the CBS affiliate in Baton Rouge, switched at 7 a.m. Central time, and an hour later the station reported on Twitter that its call center was “going crazy.”